When the Governor of the Bank of England speaks, it is always worth listening to, and he is on to something when he writes about market liquidity; he is surely right to flag the dangers of the narrow exit doors in a crowded investment room. We are told that more than $30 trillion of global assets are held in investment funds that promise daily liquidity to investors despite investing in potentially illiquid underlying assets, such as emerging market debt. What happens when everyone wants to leave at the same time? In days gone by it was the banks which needed to worry about the queues snaking out of the portals of the buildings, and onto the street: death by popular acclaim. Now it happens out of public view, and in a different sector: the fund management industry. There is (to quote Mr Carney), ‘a structural mismatch between the frequency with which [investment funds] offer redemptions, and the time it takes them to liquidate their assets.’ We have seen recently two high profile examples of this in the London investment world; indeed, it doubtless prompted the observation of the Governor in his Tokyo speech last month, but he draws what is ultimately a complacent conclusion: ‘under stress they may need to fire-sell assets… a vicious feedback loop that can ultimately disrupt market functioning.’

Ultimately? Might we be talking a few millionths of a second here? The interconnectivity of markets, and the sophistication with which systematic trading machines can target assets, amplify the vulnerability inherent in this mismatch. It is a greatly unpleasant thing to see the playing out of a modern day ‘run on a bank’, but the lesson it should instil is that there are not many steps from the particular to the pandemic.

Banks could survive safely for generations without having to worry about the fact that only a few people could get their deposit money back on a given day, because only a few people ever did need their money back each day: the wonders of fractional banking. So it has been with investment. It is why property can be held in a fund with daily trading, despite the vagaries of the property market 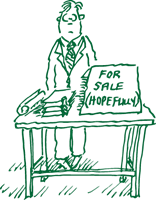 where everybody knows that a wish to sell does not translate automatically into a sale. From time to time, property-based funds have to close their doors, in the way that, from time to time, banks have to close their doors because the general truth becomes untrue in a specific circumstance. Mr Carney believes some, maybe many, investment vehicles are ‘built on a lie, which is that you can have daily liquidity’, leading to ‘an expectation for individuals that it is not different from having money in a bank’. But the greater truth – one that Carney only hints at – is that ultimately every investment is illiquid in circumstances where there is a powerful and irrational desire to liquidate holdings. This is the Achilles’ heel of the algorithm – it feels no fear, and its bloodless response to illiquidity is to front-run the virus, so that the most liquid markets can become the most dangerous, exactly because they provide, possibly even for a few minutes, the ability to trade after the game’s over.

Nowhere is this more apparent than in markets dominated by ETFs: exchange traded funds have become the autobahns of the investment journey. They are a great blessing in peacetime, but they can speed unwanted traffic in the opposite direction when the wars start. ETFs have utterly transformed the investment world. The big US markets are now traded in this ‘packaged’ form as to 16% of their entire market value, and the other major markets show similar inroads1. When Jack Bogle died – he was the founder, less than half a century ago, of the phenomenon – he was treated as a saint, since he brought the power of investing to the ordinary person. They can be traded, cumulatively, in enormous size, but for the proud bank with its marble halls which dominated the cities of Europe, that enormity in stressed circumstances is a weakness, not a strength. What happens when nobody wants them? Or, more starkly, what happens when the vestal machinery gives them the thumbs down? Then, only then perhaps, the investor wonders why equities are the preferred investment? First principles cross the mind: why have I staked my third child’s education on Netflix, or Nestlé, Amway or Huawei?

Runs in the stock market are as frightening as their banking equivalent. We have seen them only ten years ago, channelled through leverage in the banks. After ten years of experimental monetary policy, the wiring of markets and the learned behaviours of investors make the system more prone to runs. A century ago, prolific US bank robber Willie Sutton was asked why he persisted in robbing banks. ‘Because that’s where the money is’, he replied. Well, that’s no longer true. The money, as Mr Madoff observed, is now invested.

We believe that whatever causes a market dislocation, and whenever that happens, the conduit will be illiquidity. We believe that Mr Carney is absolutely right to look across from a particular example to its generic consequences, because the pathology of the specific is strikingly illustrative of how it will be when the problem is systemic.

One of the key determinants which has the power to amplify the dislocation is debt. A bank failure always involves debt, and is always toxic. At its simplest, an investor whose portfolio decreases in value simply loses the amount in the diminution of its value – much less toxic. But it is no longer as simple as that. In the last 30 years, debt has increased both in terms of the number of different ways that an individual or corporation can take on gearing, and also, attitudinally, on a willingness to do so. This has greatly increased since the Fed’s application of quantitative easing (QE), which has made the cost of servicing debt come down so sharply. As someone who started work in the early 1970s, it has been striking to see how a younger generation than me now thinks in terms of the monthly spending power, that is, net salary plus new borrowings, as the measure of ability to meet the cost of living. A pay rise is thus a multiplier of the net increase; there is little sense of a debt being a capital amount which one day will have to be paid back. Debt is a habit, and like all habits, if it begins early, perhaps as a means to fund further education, it becomes domesticated. A liquidity crisis strikes at the heart of this homeliness as debt doesn’t take a holiday. A trend started by the technique of computer programmes is exacerbated by the emotion of individuals living in a new, and considerably less benign, environment. The equivalent risk found in fractional banking has thus moved to the investment markets. This needs addressing.

At the start of the year, Henry Maxey wrote of an illusion of stability. Two of the reasons he gave have already been addressed in this investment note: QE distorted behaviour, and leverage is embedded in the assets: or, in English, the prices are vulnerable. The third is the killer point, and he writes, ‘Any de-risking of portfolios will be concentrated in the most liquid markets. In these markets, machines dominate trading. If the machines withdraw liquidity in stressed markets, and the evidence suggests they will, then expect a sharp, rapid and discontinuous drop in asset prices. Supposedly liquid markets will show themselves to be dysfunctional’. That’s why we think Mr Carney’s ‘ultimately’ will be the work of ten minutes, tops.

What should someone with money do, and what should those of us who look after, who guard their wealth, do in turn? We do not have the luxury of being mere commentators. If we predict widespread illiquidity, it’s a dereliction if we fail to protect portfolios from its icy hand.

One possible answer is to sell up and await events. But once committed to stasis, one joins the financial equivalent of the baked beans in the bunker mentality; those who ‘avoided’ the nuclear holocaust of the 1960s. It is not to be recommended.

We come at it with a shield and a sword. The shield is to ensure liquidity considerations are a central part of our investment process. This has been the work of ten years, developing both the process and the culture. But illiquidity can be used as a sword – the conditions which cause a buyers’ strike in the market driving prices frighteningly down, are also the conditions which create demand elsewhere. In our protection portfolio we hold the insurance asset that investors will be forced to buy when they are frightened and can’t sell the assets they hold.

Be careful what you – or rather we – wish for. We certainly don’t wish an outcome which makes this strategy the one which saves the bacon: but we don’t get to choose events, dear boy, events…

Sign up to receive the investment review each quarter