‘Timing is everything’ runs the investment cliché – actually it’s not: being right is better. In any event, spare a thought for the writer of this investment review who has been told that it must be in final form by 27 March. Of all ridiculous deadlines, this must rate with ‘the future of the British Army’ (deadline 1 May 1940) and ‘How are you enjoying the play Mrs Lincoln?’ (copy back to the editor at the end of Act One). This review will not take a punt at the twists and turns of events which, by the time they are read will allow the reader a snigger at the butterfingered analysis of the future not blessed by accurate prediction.

Let me start with an update on our investment progress. Three months ago, we, and our clients, had experienced a quarterly loss, which was particularly troublesome because many clients have been prepared to accept the recent dearth of upside because of our ‘skill’ at protecting the downside. The sharp recovery of equity markets has given us the satisfaction of seeing the very equities which did the damage at the end of 2018, lead the way upwards in the first quarter. In my mind, that returns the spotlight to the central question for Ruffer portfolios: are they properly positioned for today’s weather conditions? If we are indeed facing the onset of wealth-changing disorder, then the answer is ‘yes’. What we cannot be sure of is that we will make significant returns until the typhoon hits. At Christmas time, there was maximum danger in the markets because the Federal Reserve had mispositioned itself. This ‘mistake’ has been corrected, and we are back to the true battleground. Can the Fed, with its discretions and its firepower, keep a market dislocation at bay, or halt it once it has begun? We think not. Portfolios need both a depth of protection, so that dislocative, chaotic markets can be weathered, and a width of protection, since the nature of chaos is intrinsically uncertain. It is prudent not to take risks with this ahead of its denouement, but that does not mean that the portfolios are either risk-free, or reward-free. 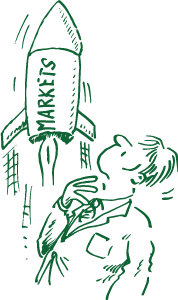 This is a theme which has long preoccupied our investment strategy; it isn’t new. This firm has been going for 25 years, and its founder returned to the investment industry 15 years before that. It seemed that in 1979, the markets were multi-generationally cheap. That was indeed the case, but this only became manifest in 1982, and the markets have gone up pretty much in a straight line since then. That fact alone might suggest that Wall Street’s rise, from the 1,000 level to nearly 27,000 (with dividends averaging another 3% per annum) might be multi-generationally expensive. But if one simply retreats from investment, long term money loses its essential advantage – the ability to remain ‘in the game’ for periods which make clear the difference between good investing and bad investing. Ruffer hasn’t got a franchise unless it remains in that first category.

Perhaps the greatest risk for UK investors is a Labour administration. A government led by Corbyn could do decisive damage to the economy, and to the portfolios of what John McDonnell calls the Few. So, some words on this. Our long-dated inflation-linked bonds should, in the early stage of this phenomenon, make the Few a fair bit richer. There’s a Labour Party publication, published last year, ‘Economics for the Many’ which has the sub-text, “We are seeking nothing less than to build a society that is radically fairer, more democratic, and more sustainable, in which the wealth of society is shared by all”. The big question is how they regard Modern Monetary Theory (MMT), for that is the instrument through whose agency the shirtsleeves of the Few will be laundered. The answer is not long in coming: page 12, to be exact, in a book of 227 pages. The writers (plural: it is edited by Mr McDonnell) are well versed in the instruments of torture. MMT is the mechanism by which ordinary nations default – paper currencies at least required forests; in a computer age it requires no more than a wall socket. The temptation to produce too much currency is easily spotted, and can be quickly punished – holders of currencies which sound like the product of a heavy cold are quick to sense indiscipline. Great economists of today have nevertheless concluded that inflation is hard to engineer (when the third world achieves it effortlessly) because, in large economies, there is an unspoken assumption that no action can be allowed to compromise the currency. MMT crosses the border, and can put the grandest of central banks on a South American trajectory. What is MMT? Here is Simon Wren-Lewis, one of the writers, on the subject. “MMT is a new macroeconomic school of thought”. He continues, “one of the merits of MMT is that it stresses that, for an economy like the UK with its own currency and central bank, a government can always fund its spending by creating its own currency. It doesn’t need to borrow…” Inflation is not, as was once asserted, a monetary phenomenon. It is a matter of confidence – a social phenomenon. MMT is an acronym well worth watching: it is already well-watched in America.

We worry, too, about the stuttering nature of globalisation, in which economies of scale have to be achieved by increasing the dominance of an operation. As the poor performance of The Kraft Heinz Company has shown, it is one thing for a manager to cut costs, and another to make the business grow. This was the lesson which investors in once-great businesses in the UK, Hanson, BTR and GEC, found in the 1990s. We worry that there is, universally, a ‘just-in-time’ consensus, which has replaced the inefficiencies of ‘just in case’. Thus the ‘financialisation’ of staple businesses, substituting debt for equity, hollows them out. Profits are optimised at the ‘per share’ level if the corporation has been buying them back, but that same corporation sees a drastic reduction if conditions worsen. This is true without any rise in real rates of interest – we are seeing, once again, that proper growth in Western economies, despite the oxygen-mask of very low interest rates, is elusive.

If we get inflation back, things turn bad for markets very quickly, since the loss of purchasing power will have to be reflected, however vestigially, in interest rates. Suppose that wage growth broke through the current ‘acceptable’ level of between 3% and 4% in the US and UK. Suppose that inflation sets off, in sympathy, on a higher course. Even if interest rates rose sluggishly both in terms of speed and amount, one could easily see rates of 3% against an inflation rate of, say 5% and rising, and of 4.5 % when inflation approached 10%. The point is that the real yields to a taxpayer on the latter example – let us assume a tax rate of 50% – would be a receipt of 2.25% against inflation of nearly 10 %. And could heavily-geared commerce flourish on a subsidised interest rate, and yet one at levels not seen since 2009? These are the things that worry us, and explains why we read these less-than-compelling volumes edited by the Shadow Chancellor to assess the dangers.

In 1979, everybody was prostrated by the terrible things that happened, and couldn’t understand why the enthusiasts wrecked their wealth by investing in the chimera, the phantom, of optimism. Now it is the reverse. One by one, the contrarians have committed to the thought that it is time to leave the ship. And, throughout the decade, the ship has sailed on. Intellectually, we are fellow travellers with those who have committed to the frailty of the vessel; our clients have asked us to invest their savings in order to make a good return over the long term. But our philosophy is fundamentally different to those who try to be right. We are determined to be ‘not wrong’. We will, sometimes – so far, only rarely – lose money because our determination to continue to take risk leads us into trouble, as it did last year. But as a philosophy, it allows us to keep in the game – we can articulate what we think is happening, its financial consequences, but the timing (the most important element? I think not) is not centre-stage. Provided our analysis is right, we will prevail at the inflection point, and still be around when the roulette wheel of events comes up with its zero.

Sign up to receive the investment review each quarter