Our investment portfolios have returned little in 2017 – but this should not be taken to mean that the portfolios are without risk. We always try to balance ‘greed’ with fear, and our ‘greedy’ equities are concentrated in those areas of the market which have favourable dynamics, without the overvaluation which invariably accompanies the allure of momentum. Our investments in fear were articulated in general terms in last quarter’s investment report – there to protect from a sharp reversal in markets. They are extremely expensive to maintain, and as a result, many who would like to hold them, do not do so. Our judgement is that they will prove an effective shield – perhaps astonishingly so, when (or, as the consensus would have it, if) the ever–cyclical markets swing onto a downward path.

So much for the risks clear and present. It is our custom to use the year–end review to look at the wider canvas, and this year is no exception. It does, however, take the narrative away from the financial, and towards the geopolitical – an area in which I claim no inherent expertise. That, however, is no reason for not tackling it head on, since our purpose is to be prudent in the financial world – and worth (or at least, price) is determined by factors well beyond the yield on an oil conglomerate, or the latest growth forecast from a central bank. A colleague has lent me a quite excellent book by Robert Kaplan: The Revenge of Geography – it started badly, reminding me of the General whose autobiography was delayed while the printers conjured up a greater supply of capital ‘I’s, but it confirms what I have always felt, that what can appear as a most surprising development in world events is, to the trained eye, a surprise only in its delayed onset.

The world feels more dangerous, and very much more uncertain, than it has for many a decade. One needs to be aware of approaching danger, but not to be so fearful of this danger that one hides in a rabbit hole. It is a game played by children, and is called ‘Grandma’s footsteps’ (or, for today’s young, ‘What’s the time, Mr Wolf?’). Realpolitik may look particularly frightening at the moment, but a time of change is always perceived as malevolent to those commentators (and readers of commentaries) who are part of the status quo, and have the most to lose from change. One of the requirements of managers of investment portfolios is to reflect the needs and aspirations of that status quo, but one can easily forget that one man’s poison is often another man’s meat.

Mr Kaplan’s thesis is that a nation’s boundaries can resist the fundamentals of geography for long periods of time, but when change occurs, it is as well to understand the geographical constraints (and opportunities) since they could become relevant. This is particularly beneficial to China – the opposite, for instance, to Russia. He goes on to say that the ebb and flow of empire is more dangerous today than hitherto – not only for the obvious reason that weaponry is so much more powerful, but that the ‘empty’ spaces are now filled up. In the old days, Britain needed to send gunships up rivers, whereas America could dominate the Indian Ocean at a distance. As America’s claims retreat, it leaves a series of vacuums, which can be controlled from a distance, a fact which for China (for instance) can be filled by a different mix of economic and military power than before.

As I came to think about this, it looks clear that some things are almost bound to happen. The first is the political collapse of a united Europe. The main board directors of Europa PLC are uncannily reminiscent of two sets of Russian leaders, whose autocracy, and tin–eared response to the realities, lost an Empire in 1917 and 1989. Is it too soon to bet on this happening west of the Danube? Maybe, maybe not. The key is to understand the brittle nature of things. No doubt there were those who thought the Putilov riots in 1905 were the start of revolution in Russia – they were wrong, of course, but they were right directionally. Far fewer thought that the assassination of Prime Minister Stolypin in 1911 was a game changer, but, to the extent that it finished any chance of rapprochement between the Imperial Court and the politicians, it was. Today, there are great changes going on within the twenty–something member states, and the political response is always, ever, to weld Europe together into a single voice, a single attitude, a single will. It is asking for trouble. It worked in the subjugation of Greece, it may or may not work in the outcome with Britain, with Spain, with Germany, with the next but one centre of crisis. It is essentially a call to those for whom the fear of another war is the mischief to be avoided. The generation in whom this resonated most strongly are now retired, with the exception of the redoubtable Ken Clarke in England, but its echo is heard by many who are still at the zenith of their power. But it is a dying sigh. Just as the young in Britain do not fear a doctrinaire and incompetent left wing government in the UK, since they were not born when the last one blew things up so spectacularly, so the young European takes peace for granted (especially now Russia is weak), and is consequently less up for the sacrifice needed to keep in place a deal that’s already done.

What are the implications of this? The shocking thing is that the Brexit deal doesn’t, in the long run, matter very much. Yes, crashing out may cost us five years’ growth (or not: who knows?), but unless you are a citizen of the world, and in charge, that’s not a key thing, at least in economic terms. In investment terms, that means that we will have to guard against an extreme reaction in the currency and asset values from a bad Brexit; but if that’s what we get, it will make British assets, priced down accordingly, attractive in comparison to those on the continent.

It is hard to escape the increasing weakness of the United States. Its nature is well summed up by the British Prime Minister, Lord Salisbury, who at a time of exceptional stress in the Empire, declared that ‘the British Lion is not a centipede; it cannot put its foot down everywhere’. Nor is the White House a rainbow – it cannot reflect every shade of colour to everyone. How it manages itself is perhaps the key to the smoothness of the ride – or vice versa. The retreat of the Spanish Empire in the seventeenth century, presided over by dysfunctional tyrants, was punctuated by decades of religious strife – a century after the casus belli of the Reformation. Britain’s retreat in the twentieth century was mixed. Its financial prostration meant that, absent America, it was unable to do anything to prevent the depression of the 1930s. A poignant example was the collapse of the Creditanstalt Bank in 1931 in Vienna. The Governor of the Bank of England correctly identified this as a pivotal moment and rushed all the reserves it could muster to shore it up – reserves which totalled just £7 million. The British Lion was legless.

It is probably in the area of power politics that the legacy of Trump’s inadequacies will be most starkly revealed. 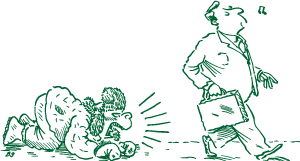 Russia is too poor to be a political threat; its bark would be worse than its bite, were it not for the fact that it is rabid – North Korea writ large. China consolidates, consolidates, biding its time.

What does this add up to? The world has become a much smaller place, but the world is too big – by a long way – to be controlled by a single player. The ‘old world’ is exhausted – if one equates indebtedness to exhaustion. It is a test which has proved trusty in all previous generations. Two thousand years ago, stability was threatened by marauders who could overpower the local authority of a distant power. Today, those marauders take a different form: they are the corporate ‘disruptors’ – the Amazons, Facebooks, Twitters, Ubers which have discountenanced governments, who are unable to stop them conversing across borders, changing the way business is done, how conversations are constructed, all the while avoiding tax. In many investment climates, they would trade at low ratings – the judgement being the speed at which they could grow while conditions remain favourable, counterbalanced by the danger of their business model being de–railed by non–market forces. Today’s market looks only at the element which is benign for the disruptors – but there will be a fight back. We are already seeing one against Uber where the authorities are increasingly imaginative in their resistance to their business model. They remain dangerous investments – remember Minister Fouquet, who overreached himself on seventeenth century France’s milch cows, and who hosted a dinner for Louis XIV, and 7,000 others. Too lavish, thought the king, and Fouquet spent the next 19 years in prison, no doubt on a modest price/earnings ratio.

The future is always in a place that the guide books don’t cover, and where the phrase for ‘how much is the wine’ is only a hair’s breadth away from an insulting reference to the father–in–law. There are two big questions for today’s investor – how long before the next chapter, and, secondly, what will that chapter bring? In the opening days of 2018, we hope for better figures than those we provided in 2017.