It is natural that people who run service industries tend to think that they provide a unique service, with the enthusiasts amongst the ranks opting for ‘truly unique’, and, every now and again, ‘extremely unique’. I asked myself that question – are we unique? The question is, of course, absurd – of course we’re not! But I have come to the nonplussing answer that we are considerably different from most of our peers.

This review takes a step back from the world’s travails and opportunities, and addresses how we set about investing clients’ money. There is some virtue in simply getting on with it – no navel–gazing here, please! But regulation forces an answer to the question, ‘Is what you do suitable for the client?’ For many organisations, who purport to do everything, the answer to the question is to show that the right bran–tub was selected. We parade the fact that we only do one thing – so the answer is binary: what we do is either suitable for a particular client or not. This is why more questions are asked of clients than ever before, both as to their objective requirements and their subjective wishes. It has also made me think through exactly what our investment offering consists of – and this is my answer to that question.

At the centre, is a desire not to lose money. This is disconcerting, since this can be achieved by placing cash in the current account of a bank, and going back to sleep. It has the considerable advantage of avoiding the payment of fees. Why go to the trouble, uncertainty and expense of going to a fund manager whose aspiration is the same as the local bank in the High Street? The answer is that an investment differs from a deposit because it has risk – and risk can either provide a good outcome, or a bad one. The deposit has no upside, beyond the interest it earns – and long–term savings are badly served by such a riskless strategy. However much the marketing departments might wish it otherwise, if you would have the opportunity of a return, you must inevitably take a risk. I have found, over a lifetime of looking after clients, that they love making money, but they hate losing it more. As a slogan, it therefore resonates; the swizz is that not losing money in a portfolio of investments is sometimes impossible to achieve. At Ruffer, we have an added complication: we have been going for twenty years without making a material loss in any single year – the time period over which we judge ourselves. Here is an organisation which appears to say it can walk on water – and, for a couple of decades, it looks like it has! Can I let you in on a secret, dear reader? It’s a fluke. It’s not a fluke in a directional sense – only in the sense that we haven’t failed the test. Sooner or later we will, just as those who aspire to ‘outperform the indices’ don’t do it relentlessly year after year – sometimes they have to point out that aspiration and reality are not the same thing. The correct response to our bedrock desire – not to lose money – and our long–term performance which is remarkably consistent with it, is that we really do have a robust investment process.

The first thing to say is that our aspiration gives us no hiding place, since every investment has the possibility of going down in value, and, even as one buys an investment, it is possible to articulate a number of plausible scenarios which would cause a loss of value. It is frustrating, since it results in the rejection of investments which look to have upside – and which go on subsequently to prove the point – because of worrisome downside. Spreading risk is a crucial element in the exercise – and this means that in a portfolio there will always be something letting the side down, holding back good work done in other parts of the portfolio.

There are two phenomena which aid our way of doing things. The first is that the financial markets are too loosely bound together for everything to be priced efficiently. If the financial world is a casino, then it’s one where the roulette wheel is wonky, and some numbers come up more regularly than others, and the croupier is drunk, so calls the odds wrong periodically. The analogy is a good one – juxtapose two opposite ‘plays’, and if events prove one a loser, causing it to be no worse than dull, and the other is a sparkler, then you escape the tyranny of being ignorant of the future.

The second is that future events are much more knowable than generally conceded – it is their timing which is so opaque that the human mind seems indifferent to the advantages of isolating those things which are very likely to result from today’s events. There’s an old adage that being right too soon is simply a different way of being wrong – but one can build investments that benefit from future events of uncertain timing into the portfolio, without compromising today’s performance. This is not easy, since in the latter stages of a bull market momentum tends to drive down tomorrow’s winners, and drive up tomorrow’s losers – the period preceding an inflection in the market is a tricky time for our style of investment. It is, however, essential, since tigers don’t signal when it’s time to stop riding them.

We are therefore looking for asymmetric investments with more chance of a favourable outcome than an unfavourable one. We also need to find investments which cover our backs if a less likely eventuality occurs, but which won’t let us down if it doesn’t. In research, stockpickers play their part if they find underestimated companies; ‘big picture’ researchers play theirs by correctly analysing the pressures and opportunities in the world.

It is this big picture ‘macro’ analysis which helps identify the inflection points (which we have called well during our 20 years of existence), and has helped us in the aftermath of the inflection point. Only when the trend matures, and the consensus view is that it is quasi–permanent, do we slip away from the momentum to embrace the next phase – and in this we will tend to be too soon. This move always appears not so much wrong as perverse – expectations for a continuity are high; it looks like foolishness to have changed direction.

Looking back over the last twenty years, the first five of them were the easiest, and it was during this time that I became aware of the power of this approach to investing. The insight, in 1991, was that the world would go into disinflation, which was regarded with incredulity – but all the new forces in the world pointed that way. China was growing to a size, coupled with the rest of the emerging economies to put wage pressure on the West. Volcker, as Chair of the Fed had put a cap on money supply with eye–wateringly high interest rates. Other countries were adopting Thatcher–like policies which reduced union power, and therefore the possibility of a wages led validation of the inflationary impulse. The rest was easy – invest in blue–chip equities for half the money, and long (preferably irredeemable) fixed interest stocks with the other half: the economic cycle was thereby covered, equities leading the way in the up phase, and the fixed interest stocks in the setbacks.

The distorted price of money – no yield at all, really, on deposits throughout the world – has had two consequences. The first is that it has driven all asset prices up – everything is correlated. The correction is likely to see a similarly widespread fall. The second is more pernicious since the distortion is in riskless money, ie deposits. It means that the safer the investment, the more distorted is its price; there’s no safety in a safe investment when it trades at too high a price. All asset classes will fall together, and safe assets will fall by as much as risky assets, because of the distortion.

It is for this reason that we added to our armoury two ways of forcing the odds to our advantage; the first was to favour, from 2009, some illiquid investments, to take advantage of the opportunities thrown up in the rubble of the credit–crunch. Such investments have a timescale not suitable for everybody, so, unusually, we flagged this point to clients to be sure we were doing the right thing. It has been a very satisfactory, if small, element in portfolios. 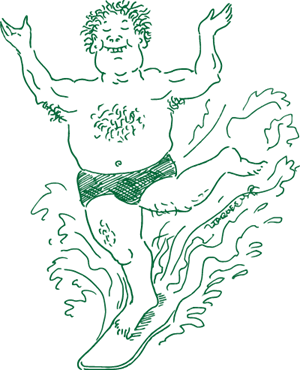 The other is to use options, which are an opportunity to give protection in markets where there is otherwise no hiding–place. It introduces an unwanted element of timing into the portfolios, so we do not commit much money to this, and it may well be the case that our commitments look too timidly small if and when they are needed. We feel that it will be in the aftermath of this shock, when inflation surges back into the world, that the portfolios will feel like those bronzed chaps surfing the Waikiki beach. If only!