Today’s investment world is full of distortions, and the effect on investors is that they rationalise these fantasies, so that what is false is represented in their minds as true. Prudent investors will want to reverse this process!

First, let us re–cap on what has happened over the last ten years.

Circumstances arose in the middle years of the 2000s which caused a borrowing mania; the causes, while fascinating, need not detain us here. The effect of that excess of debt produced a fault line which resulted in a financial earthquake in 2008, setting off a deeply deflationary chain of events – dysfunction in the financial world led to a dramatic slowdown in the real economy.

The authorities, primarily in the United States, responded to this crisis with a wave of liquidity, which looked like the printing of money to nervous conservatives, and which looked like something altogether more theatrically benevolent to others – they gave it the name of ‘quantitative easing’. Whether this is monetisation (paper currencies become wastepaper currencies) or whether quantitative easing is in fact an idea which allows an imprisoned economy to hum the overture of Beethoven’s Fidelio, is still unresolved.

The effect of this initiative has been to buy time. Introduced in the UK in March 2009, as the real economy was responding to the financial crisis with a juddering cessation of activity, both the financial and economic fundamentals stabilised, and then improved, recovering much of the ground lost as a result of the 2008 dislocation.

Simultaneously with quantitative easing, interest rates were reduced, effectively to zero, which had a double effect on the financial world – it meant that servicing newly–created debt became unburdensome, and it created a big incentive for those holding cash to seek other ways to make a return on their assets.

In terms of crisis management, this was wonderfully effective, and so it should have been. The newly–minted money could ensure that the liquidity crisis engendered by the default of Lehman in the autumn of 2008 spread no further. It meant, for instance, that the United States mortgage and residential housing market could be rescued, with a cordon sanitaire placed around the wounded corporations which provided the mortgages. The financial system, taken as a whole, was not forced to downsize.

The removal of any interest rates at all in the Western world meant that this process could be taken a stage further – not only were institutions saved from forced retreat from the market, but zero interest rates gave an incentive to hold their ground voluntarily, notwithstanding the fragility of the system. It might be raining hard on the football pitch, but if you smear the changing room with last week’s catch of cod, the smell incentivised the players to continue to kick the ball around.

That’s the background, shorn of unsightly hair. But it’s a story that is getting long in the tooth, and we are in need of an update. Bernanke bought time, but did time meet Bernanke half–way? The acute phase is behind us, but the question today is whether there has been a healing in the economy.

Five years on, the world economies have disappointed after the first sharp bounce back. The defibrillator worked, and the heart of economic activity began beating again after the 2008 heart–attack which had looked fatal. But the patient is sweaty, and still over–keen on Krispy Kremes.

Put into English, there has been no return to long–term economic growth. The verdict must therefore be that, successful as quantitative easing has been in terms of stabilising the economic and financial system, it has little to boast about in terms of curative power. The distortion has become embedded in the system (and here we are talking about three distortions – the original quantitative easing, the near–contemporaneous reduction of interest–rates nearly to zero and the trumpeted purchase of assets by the Fed and other central banks).

This is worrisome for two reasons. If an electro–shock has not had the expected effect in such a timescale, then it is not an effective instrument. Economic sluggishness does not prove that the continued existence of so much debt is a barrier to economic growth, but it’s the most likely explanation.

Quantitative easing can resolve the acute problem when everybody wants to liquidate their debt, but it cannot resolve the chronic problem of its future pay–down. The Chairman of the Fed, Ben Bernanke, had the insight to see that debt cannot default without triggering a 1930s–style depression, but without enough collateral around, the totality of debt is never far from defaulting. Low interest rates may stop the debt defaulting, but it also creates a re–run of the circumstances which led to the 2008 crisis. Money is being borrowed at nearly–nil cost, and invested in yield–bearing assets, creating yet more garbage–debt.

This creates a dilemma: conditions which stabilise existing accumulations of debt result in more debt being created. The resulting ambivalence can be observed in the UK mortgage market – a government scheme to support mortgage issuance, with the government simultaneously giving the Bank of England power to hold it back. It is also at the heart of the ‘tapering’ debate: when will the Federal Reserve step back from buying assets to support the financial system? Both the UK Chancellor and the Fed are worried about inflating a credit bubble. The market is well aware of this, and approaches tapering – a deeply uninteresting issue – with the passion of a medieval theologian.

As always, it’s the stuff that is disregarded which has considerable potency. James Aitken of Aitken Advisers has identified just such a concern: that of new bank regulation, which is going to change the way that banks do business. If all other things are equal, a bank will take positions which are only very marginally profitable provided it believes that it is safe to do, and sizeable positions could be easily put in place. But if the regulators require the bank to put in more capital to support the trade, they effectively reduce the willingness to do the trade, introducing sclerosis into the system. If it’s not worth the bank taking on extra capital, then liquidity contracts – and this could be destabilising. 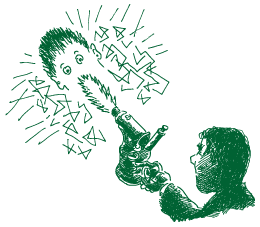 Investors face a blowtorch in an ice–cave world. It’s permafrost if markets are left to their own devices, and flame–fried if the authorities overdo it. We continue to believe that the authorities are absolutely determined not to let the deflationary forces win; forces which constantly threaten to overwhelm the system. If there’s little chance that the authorities will back away from these forces, sooner or later, they will overdo the money creation, and we’ll get inflation. We continue to protect your investments against this outcome.