Markets are high! (you heard it here last)

Nearly twenty years ago, I wrote an investment review called ‘the fatboy charts’ – so named because it echoed the menace of the Dickens character of that name in The Pickwick Papers who observed, ‘I want to make your flesh creep’. Readers were invited to believe that 1997 was surely the top of the market; in fact it was published shortly before the biggest stock market boom the world had ever seen, the climax of which was missed completely by Ruffer, and, by extension, its clients.

Markets, especially in the US, are once again exceedingly expensive. The 1997 charts were not without insight; twelve years later the markets were lower than they were in that year notwithstanding their athletic increase over the dot-com boom. Indeed, it is virtually an absolute truth that the easy money made in stock markets is invariably in those which later prove to have been overvalued. If there is a moral today, it is that markets are very likely to be lower – perhaps much lower than they are now – but that, on a balance of probabilities, they will be higher, perhaps much higher, in the immediate future.

This is not so much hedging our bets, rather it’s spending time in reconnaissance. We wish to stay out of trouble. We seek to avoid being becalmed in a Sargasso Sea when all around the barques and cutters speed forwards to a further destination; but nor do we wish to join the packed ranks of naked bathers who experience the retreating tide. We respect the former; we fear the latter.

Back to the reconnaissance: Exhibit A is the price/earnings (PE) ratio for the US market (on profits achieved: the ‘trailing’ basis). Until the early 1960s, it had never happened that the market PE ratio had gone to over twenty times, except during profitless years – and the stock market took another twenty years to clamber back to those heady days of 1960 to 1966. If profitability is set to decline, we should expect a lower valuation on lower profits – and this is why falling markets shock people – they don’t see the double-punch of a lower rating on lower profits coming. 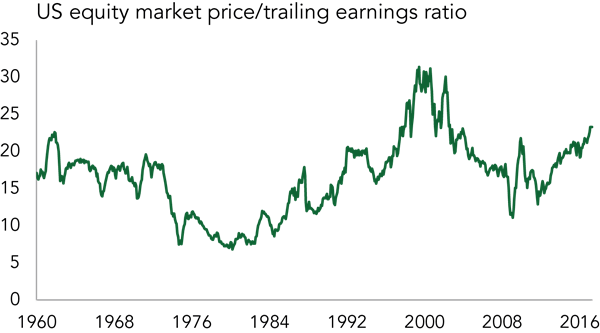 Now for Exhibit B: the price to sales ratio (the PSR). It is a rough and ready chart because a corporation’s activities are not only funded by equity, but also by debt. We owe this glimpse of the obvious (now we’ve seen it, of course) to Miko Giedroyc’s work at Warburgs in the 1990s; a company wholly funded by equity will seem more ‘expensive’ on this chart than one heavily reliant on borrowings. Back in 1986 the advice of Ken Fisher, the guru in ‘Illustrated Lessons From Financial Cycles’ was ‘you should never buy a big company’s stock unless the company’s total stock market value is less than 40% of sales.’ Today the US markets trade around 200%. It has more than doubled from when I started in the early 1980s. It is only one indicator, and perhaps not a very good one, but I like it because you can’t fudge either the market capitalisation of a corporation, or its revenues. So the ratio is clean. Mr Fisher, back in the 1980s, said of it, ‘It keeps you out of situations where unsustainably high earnings mark an overpriced stock.’ Perhaps the PSR will once again prove to have been a bell-wether. 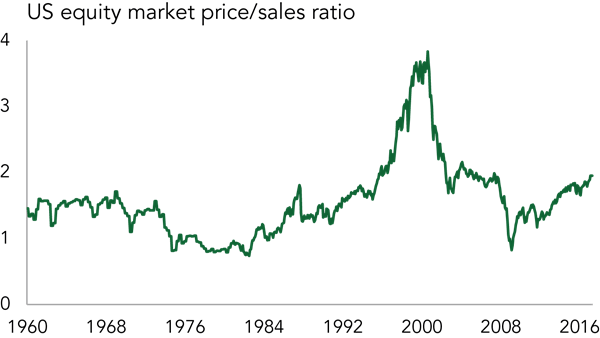 The next exhibit is Tobin’s Q. This represents the estimate of the cost of replicating the stock market. The ratio between market cap and replacement cost normally shows the former at a big discount – sometimes as much as 75%. Today there is no discount. 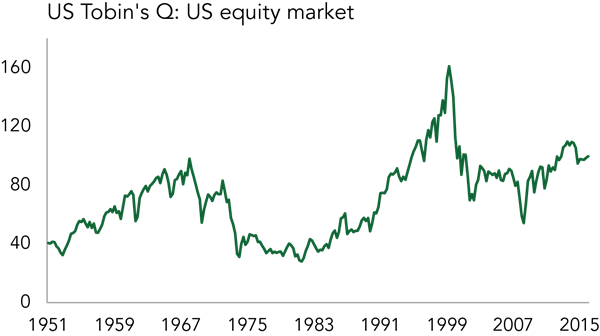 The last exhibit is the ratio of middle-America’s earnings compared to the US stock market. It is the Trump/Brexit chart. Over fifty years, it will be seen that those fortunate enough to invest have done three times better than the working man who earns and spends. 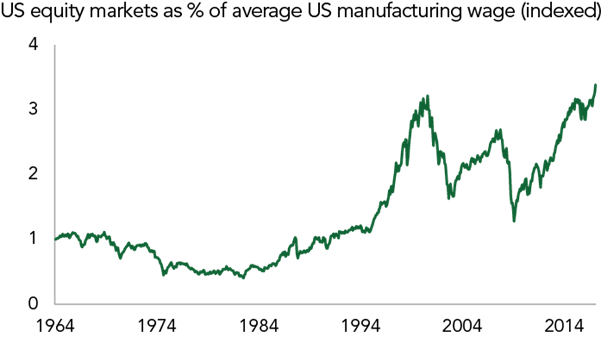 Markets are dangerous when they are expensive (the first three charts show that), but there needs to be a reason for them to fall. If the markets discern a reason, they will fall sharply. We believe that it is now clear what that reason will be. The working man has started the fight back, and our judgement is that they are set to win the coming battle. This is very bad for profits. The recent (unsuccessful) bid by Kraft for Unilever encapsulates the failure of the ancien regime to hold its ground. It is worth a moment to consider the bid. Why, for instance, was the bid not the other way round, with Unilever bidding for Kraft? After all Unilever at $140 billion is the bigger company – Kraft is capitalised at $110 billion. The reason is that Kraft is prepared more implacably to apply the logic of the market place: use the extra muscle of its enhanced buying power to squeeze prices to retailers and thereby gain more shelf space, to close manufacturing divisions, to streamline production. Not good for wages, or communities, but good for market valuations.

A move from internationalism, of a world of ‘winner take all’, is bound to be harmful to profits; we are looking, perhaps, at a setting sun for corporate prosperity. There have been three zephyr winds which have transformed the outlook over the last 40 years – each of the three has enhanced stock market fortunes. The first of these we have already mentioned, which is the wages which have to be paid. They have fallen from 61% of corporate income to around 57%. Next, government taxes (local and national) have to be met. Many corporations are now bigger than the countries in which they operate and pay little or no tax. Finally, management make their claim. In each of these, developments have occurred which have favoured the shareholder. Management have learnt their stock options dwarf even egregious salaries: management power lies in an alliance with shareholder power. Now emoluments for the elite are under pressure.

What is the message we must take from this? It is, I think, that we all get used to a status quo, however different from other days, however hard to explain. I remember buying Unilever (currently trailing PE 25) some thirty-something years ago, and an old hand telling me that it was a bear trap, and to be avoided. ‘But it’s on a PE of four’, I said, to which my colleague chortled and said, ‘I know, I know, we’ve all made that mistake’, going on to say that Unilever had always been ridiculously cheap, and would always remain so. The moral is not that Unilever is absurdly expensive today. It is that it might be, for market valuations are like tides or hemlines, rising and falling within bounds, and today they are high.

Print to PDF
2017 Q2
July 2017: Stormy weather can be local, but the interlocking nature of Britain’s travails have wider implications and threaten to upset the investment apple-cart.
Read
2017 Q3
October 2017: Back in the late 1980s, investment strategy seemed to revolve largely around the geographic weightings of equities.
Read
2017 Q4
January 2018: Our investment portfolios have returned little in 2017 – but this should not be taken to mean that the portfolios are without risk.
Read

Past performance is not a guide to future performance. The value of investments and the income derived therefrom can decrease as well as increase and you may not get back the full amount originally invested.