Our reviews tend to be big pictures or smaller snapshots; this is a ‘big one’, an explanation, as candidly as I can, as to how we set about investing your money. It is, I hope, neither defensive in tone (a very reasonable response to the recent returns, although this quarter has been better), nor arrogant (the ultimate killer in a world where none of us know what the future will bring).

First, a reminder of what we are trying to do: to deliver positive returns, regardless of how the financial markets perform.

This is not, in these days of absolute return, such an unusual aspiration. What is more uncommon is the way we set about achieving this. The key point is we avoid, so far as we are able, the attempt to call future events correctly. If you have the possibility to shoot the lights out by being right, you retain the possibility of shooting yourself in the foot if you are wrong. So our ambition is to be ‘not wrong’. The reason for this is that if we put clients’ money at risk, and we avoid losing money, the inherent volatility of the risk taken will ensure that, as an indirect consequence, the value of the portfolio will almost certainly rise over that period.

Another way to understand what we do is to think of the mask of Janus, the double–sided mask which shows on one side, a smiling countenance, and, on the other, a dark scowl. A desire to make money directly from embracing risk is achieved by courting the smiling face; a desire to make money indirectly, as we do, is achieved by conciliating the angry face. The desire ‘never to lose money’ is of exactly the same speculative nature as the desire ‘always to beat the indices’. Nobody expects a consistent outperformance, year by year, of the indices, but some investors achieve it sufficiently often, and by a sufficiently high margin, to validate ‘beating the indices’ as an effective target to investors.

We choose the indirect method: ‘never to lose money’. Our long term performance, since we started over 24 years ago, shows that it works, but over any 12 month period, it sometimes hasn’t – only once has a year–on–year fall exceeded 5%. This may sound like an el dorado, but investors with Ruffer know first–hand that it often doesn’t feel that way. We believe this is true for (at least) two reasons. The first is that whilst markets in the last 25 years have enjoyed a high percentage of up quarters (nearly three quarters of them were ‘up’ in the period), they tend to be punctuated by sharp crevasse–like falls which make the total return more modest than this upward escalator would suggest. Taking advantage of the crevasses is, arithmetically, more important than capturing the highest percentage of ‘up’ moves. The other is that, since 2016, the markets have been dominated by a fundamental change of belief about the nature of investment return; this is a change, which, if it turns out to be semi–permanent, will have proved to have been a one–off opportunity to make money as asset prices have revalued upwards. If temporary, it will reverse.

Our judgement (which will be vindicated or otherwise) is that the risk of reversal is too great, and its consequences too severe, to embrace the status quo.

We have enjoyed a long bull market which dates back to 10 August 1982, the day I got engaged to my wife of nearly 36 years. Its early exuberance was the recovery from multi–generational cheapness, and its persistence into, and through, the 1990s was on the back of a revaluation of assets as inflation fell, and long–term interest rates came down. The brittle financial conditions which followed the credit crunch in 2008 have seen interest rates come down to record low levels. This has seen the ‘north star’ of investment (top grade government–issue bonds) trade unprecedentedly expensively. This has caused all other assets to trade sympathetically upwards. Markets look absolutely expensive by historic yardsticks, but they don’t look expensive compared to bonds, and bonds don’t look expensive if long–term interest rates are regarded as settled. Certainly, governments and market strategists alike seem to believe that they will remain at or around their current levels. In this world, either all asset classes are underpinned because they are fairly priced against one another, or they are all overpriced, and will fall in unison. A conventional diversified portfolio, classically divided between stocks and fixed interest, will most likely prove a false haven of safety. It has worked since the start of the disinflationary 1990s, (indeed, it was, at its heart, the reason that we have managed that quarter century of all–weather returns), but it won’t work in the next crisis. As interest rates rise, the Federal Reserve 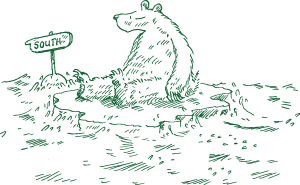 will discover that assumptions about long–term discount rates (the basis for market valuations) will reflect this. It is a dangerous prospect for investors. Many, I am sure, do not realise that exposure to the market is predicated on the sturdiness of this belief. Others will know it, but do not worry about winter while enjoying the summer breezes. Those who bet against it look like polar bears on a small iceberg, heading south.

All investors have a natural bias. Those who have acted on a natural bias towards being bearish have either been killed, or starved to death. The market is now dominated by those who have learnt that markets climb a wall of worry; it took at least a couple of years for markets to recover their nerve after the 1987 crash, and the period of recovery from a market setback has become shorter and shorter, as those who ‘weren’t brave enough’ learnt the mistake of selling on bad news. Now we have the logical result: markets don’t go down on bad news, with the result that bad news is not even regarded as bad news at all.

I am not a natural bear, I am a natural contrarian: by instinct, an investment bull in the 1970s, when markets slumped, and for most of this century, a market bear when they soared. Why then, is Ruffer LLP still around, if we’ve been natural unbelievers in the 35–year–long bull market? It comes back to what we are trying to do: to deliver consistent positive returns, regardless of how the financial markets perform. We are fearful of trying to be entirely right, because investment positions which are right for one environment will be wrong for another, and who is to say that events will play out according to one’s prejudices? In short, our disciplines have saved us from our bias; if the markets turn sharply down, you can be sure that our contrariness will make us naturally bullish much too soon (Colonel Fred Burnaby’s nanny called him contradictorious, and we are Burnabys at heart).

Our instincts alone would have produced a considerably poorer performance than we have achieved and will, no doubt, ensure a more compromised ‘success’ at the next inflexion point. Compromising our contrarian instincts, for better or for worse, is a key part of our conservatism, since markets can outlast the strongest conviction – and will that conviction be right, anyway?

Have we any regrets (and by ‘regrets’, I mean did we do, or fail to do, something which we really should have got right, and didn’t)? In detail, a myriad of things. We have missed many great opportunities: we salute Fevertree and all who sit in her branches; well done the FAANGs, whose journey to the moon has been in unmanned spacecraft as far as Ruffer is concerned. (We have made money in several FAANG tech stocks, but not nearly as much as could have been made by the true believer.) Our long belief in Japanese banks has been a brake on performance. We believed that they would protect us in any reflationary period which might hurt the index–linked bond positions; we had gone for Japan because we thought that was where inflation would break out first. It hasn’t happened for banks worldwide, but especially in Japan. The positive news out of Japan has come in the form of real growth, rather than inflation, which has left banking shares on the periphery of the market rally there. Nevertheless, we believe a very tight labour market, and the desire by the government (and, to some extent, the Bank of Japan) to keep the economy ‘hot’, means the rise in inflation has been delayed, not deferred. If it comes through in the second half of 2018, as we believe, the belated bunting will wave in the streets for this constituency within the portfolios.

Our calls on currencies have been intermittent, but that is in part due to the fact that they have to do more than one thing. In Japan, they protect the sterling value of yen–denominated assets (weak markets presage strong currencies), but they also change the mix versus the base currency. In America, the dollar looks to be well set as interest rates there rise faster than elsewhere, and it has always enjoyed a safe haven status in difficult times. But will this be enough in the current environment? We have turned more friendly towards the US currency, but are reluctant to make this a bold and outsized call.

These are our thoughts as we strive to keep clients safe. We yearn that we might make them – you – feel pleased to be looked after here. We feel that we are letting you down when we make no money, but the real test is ahead of us.

Return to the archive