How things have changed since the last investment review in April. It is a reminder that ‘events, dear boy, events’ are not always benign, and one observes that France, which can usually be relied on to pick up a ‘Q’ with no ‘u’ in Scrabble, has gained itself a president who has immediately set about uniting the country in a way that Theresa May was meant to do, but didn’t.

It is a reminder, too, that stormy weather can be local, but the interlocking nature of Britain’s travails have wider implications and threaten to upset the investment apple–cart.

Britain is voting for change but it doesn’t know what change it wants. It went first for Nick Clegg (2010), Brexit (2016), Theresa May (in May), Corbyn (three weeks later). Democracy demands all are taken seriously; that is difficult to translate into a coherent negotiating stand in the deliberations which lie ahead of us in the encounter with the EU. The ensuing muddle could unsettle the long–term stability of both Britain and the EU, and the mood in Europe seems to be one which comes to the table with an agenda designed to look backwards, rather than forwards.

The greater problem for the investor is that we have witnessed a sea–change, which is reversing the momentous election result in 1979 when post–war socialism gave way to the enterprise markets of the Thatcher era. Those of us who lived through that period knew it for what it was but we had no idea of its full implications. So it is today. The overwhelming majority of the old – those who own the assets – voted Conservative. The overwhelming majority of the young – who resent the generations ahead of them which hog the jobs, the houses, the savings – voted Labour. Each year that goes by will increase the numbers of the latter, and, each year that goes by does the opposite to the grey–haired cohort of conservatism. The Wizard of Oz on the yellow brick road will, sooner or later, march to the sound of the young, and to the tune of the Left. British conservatives are beginning to feel, first–hand, what it is like to be a sophisticated neo–liberal in the United States, watching last year the inexorable rise of a political force so luminously absurd (or so it seems) that it cannot possibly prevail.

As if to make the point in caricature, there has been the tragedy of Grenfell Tower – the discovery that the poorest in society have been routinely living in danger because of indigent safety standards. Suddenly EU red tape does not seem so pointless.

What is the take–away from this? It is that the moneyed classes throughout the world are under threat. In 1979, we saw the rise of Mrs Thatcher as a national phenomenon – but it was part of a global movement – and so it will be this time. Mrs May versus Mr Corbyn looks, too, like a local, national, confrontation – but it is a representation of an international tussle over who is in charge: the farmer, or the bullocks? The farmer has the knowledge, and the initiative to keep things in order – but if he fails to do so, and the bullocks are energized and united, the farmer – small in stature, and alone – cedes to the new order. We are witnessing this ceding of control from farmer to bullocks. They have the energy: who did not hear the chanting of ‘Oh – Jeremy Corbyn’ at Glastonbury? Britain, and on a broader canvas the world, is slipping, possibly inexorably, into bullock country.

This has one defining feature – it is a world of living for the day. So ‘austerity’, balancing the books, in this new world represents moral compromise. The brave firefighters, the nurses, whose job has not sniffed a pay rise since Florence Nightingale was middle–aged (or so it seems), will be the first to be rewarded. Then there will be a gargantuan infrastructure spend, resisted only by those who are too hard–hearted to want a healthy country, or safe housing (or so it seems). It is a world where Theresa May’s wooden persona looks unfeeling, when the sweet reasonableness of Jeremy Corbyn is not so much arguable, as unarguable. These are not value judgements; they are reflections of how new truths replace old truths. The real Truth remains, as ever, unconsulted, unrecognised.

Britain has, until recently, been able to be aloof from these chill winds, since other countries have been fighting these battles for many years. Welcome to Populism, Great Britain!

One of the fascinating insights into human psyche is that, even as the storm clouds gather, there is a sense that all is awfully well. Was it not our own prime minister, Harold Macmillan, who said, ‘most of our people have never had it so good!’, yet over the ensuing decade Britain declined towards the chaos of the 1970s? And we have similar voices today. Here, last month, is Janet Yellen, Chair of the US Federal Reserve – second only to Angela Merkel in wielding real political power in the world: ‘It would be [going] too far to suggest that there will never be another crisis; I do think we’re much safer, and I hope that it will not be in our lifetimes, and I don’t think it will be’. Here’s another, from an investment commentary of 17 June: ‘the Dutch and French elections conclusively rejected the populist surge, and now financial markets have a reassuring combination of stable economic growth and political calm’.

This Pangloss is far from a true understanding of the situation. The last bout of inflation, which subsided in the late 1980s, left the world with manageable borrowings – not, it may be said, because the West had refrained from further borrowing, but because the repression of the real value of savings acted as collateral for the debt. A generation of growing indebtedness since then has revealed the same problem that created the 1970s’ bear market: debt with no collateral. It looked as though this helter–skelter growth had come to an end in 2008, but it had not. Quantitative easing – a desperate last throw by desperadoes – turned out to be good for the farmers, but bad for the bullocks. The savers – the old and the economically savvy – saw inflation in their assets, and enjoyed it; the bullocks – those without savings, had a hard time, and want things to change.

The world is at an impasse. There is a great deal of debt around, much of it unsound. The beneficiaries of this borrowing are big enough to ensure that asset prices have continued to go up, but not big enough to see a general uplift in living conditions. The combination of disruptive technology and easy movement of people around the world keeps the general workforce on the defensive. The discovery that politics gives them a voice that their collective skills in the market place do not, means that it is through politics that we will see the change–over of power – from old to young, from saver to spender.

As I write this, it seems so radical, and yet so obvious. Our call that inflation is on the way is the irresistible conclusion which one must draw; in the world that is passing, it was asset prices that went up; in the world that is coming, it will be wages and retail prices that go up. The credit crunch of 2008 was the natural onset of the cold winter which removes the excesses of the long prosperity which preceded it; the Fed turned the radiators on, thereby artificially prolonging the summer, and now that it, too, is ending, we are looking once again at the elemental corrective to economic excess – a destruction of savings.

It is our job to protect clients to preserve the wealth in winter, as well as to encourage its growth in summer. As always, we are less interested in when it will happen, and more interested in the shape of the difficulties if and when they arise. If our analysis is correct, there will be few hiding places, and, unlike the last twenty–five years, cash will not be safe. 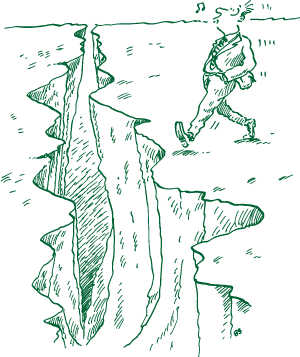 In our view, the perception that wealth is endangered in the world will come suddenly, and not gradually, and it will take the form of the sort of financial crisis that Ms Yellen believes is all but extinct. It will itself be fundamental, in the way that 2008 and 1929 changed the whole economic and investment landscape, whereas the 1987 stock market crash did not. That setback came out of a blue sky, and it was, in hindsight, right to buy into the markets only days after the storm hit. It is unlikely that this time it will be right to do so. Great stock market bottoms are born of exhaustion, not of the extremity of fear – and, so far, we haven’t even got to the point of being frightened.