The year end review is always built around a broad look at events, and a quiet break gives a chance for a mood to settle on the array of factors which baffle, excite, mystify and alarm this particular body politic. Without the pause which refreshes, one is too absolutely caught up in the moment. I remember my reaction at hearing that President Reagan had been shot – ‘Damn, I wish I had held off buying those Wheelabrator Frye shares!’

I will recount an incident in my life which has come to mind recently. In 1980, I went to Czechoslovakia as part of a brief to foster the dissidents in Prague, 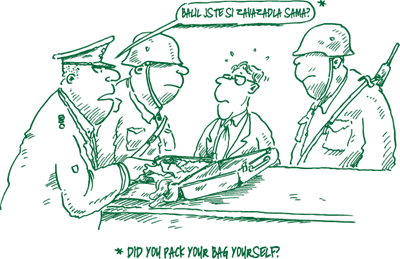 who were under the cosh of communism; Professor Roger Scruton had organised underground lectures on philosophy to train up a cadre of intellectuals in free thought, and he believed that a similar spirit in Christian circles would be a further resource in this unloved, but so very loveable country. It was not long, inevitably, before one’s blundering visits and conversations came to the notice of those who were employed to keep a tab on inappropriate behaviour, and I became quite adept at shaking off those who followed me – until the next one came along. A meeting with a Jewish–born nun was memorable; nineteen of her previous thirty–five years spent in prison, roughly half because she was a Jewess, and half because she was a Christian. She had a transcript of the trial of the Archbishop of Prague, who had recently been tried in camera. My job was to get it out of the country so that it could be given publicity in the West. Despite being interviewed and searched at Prague airport, the document wasn’t discovered, and I made it back to England in one piece.

I was surprised to discover how little sense of triumph I felt – and quite right, too. I had been, in retrospect, a sort of plague–carrier, where the mischief of any misjudgements would be visited on others. At Ruffer LLP, we carry an enormous responsibility for other people’s financial well–being, and it is our responsibility to keep it safe. Today, our job as investment managers feels very much like those dark days in Prague – if we get it wrong, we hurt the clients (it is, of course, ever thus), but the backcloth is one where the ability to get it right is not anchored to any reality.

Then, there were no certainties on which to set the compass, a fact emphasised by the inscrutable Czech language, where even road signs gave up nothing of the message they were intended to convey. Today, we live in a land where there are no investment fundamentals and the language of central bankers is as informative as the road signs. (Winston Churchill, Britain’s worst twentieth century Chancellor of the Exchequer, exclaimed, ‘Why is it that when two bankers meet they start talking Persian?’) The reduction of interest rates below their natural levels has poisoned the river at its source, and nobody knows whether it is fit to drink.

Perhaps we should not overdo the Kafka–quality of the investment world: where no valuations can be trusted, there are brave individuals, dissidents, who, if one chanced to be in the right place, could be seen being bundled into cars by gentlemen in mackintoshes and homburg hats. It is Mr Market who drives this particular car, and the danger in favouring the fundamentals over the distortions can be painful – and the pain is felt by the clients.

The effect of this is to benefit those investors who don’t know what’s going on (the mechanical investor), and those who invest cynically (the momentum investor). The latter always thrives in markets which have held the same direction for an extended period of time – this bull market is about to enter an unprecedented ninth year with no significant setback. The more interesting is what I call the mechanical investor, who takes a single aspect of the investment universe and applies it to the whole. Stockpickers who, for instance, can discern which companies will benefit from the cross–currents of the global deflationary forces, have had a field day – it takes real skill to achieve, and yet it only works if one closes one’s eyes to the uncertainties and distortions in the world’s markets. Tunnel vision has been an important ingredient in performance for many years, but became essential in 2016.

More instructive, perhaps, has been the excellent performance of the tracker funds, commonly known as exchange traded funds (ETFs). These invest in indices, whether of equity or fixed interest markets and commodities like gold. Because they track the constituent stocks/bonds within an index, they deal mechanistically, and they are cheap to administer, so they can therefore always be expected to outperform fund managers who are invested in the same bundle of assets – but not by much. In the event, they have, indeed, been outperforming – by a country mile. A representative index tracker should be expected to perform averagely, but they have been doing much better than that. The reason is that an index always looks average, so it seems centrally safe in an investment portfolio. But its constituent parts might look far from safe to an investment mind. A good way of understanding this is to recall the late 1990s, and the TMT boom. It was before the days of ETFs. It was equally hard then to beat the large equity indices by the superior stockpicking of large companies. There was only one way of doing it, which was to overweight the small minority of its constituents which were the beneficiaries of that boom. No doubt there were those who took exactly this approach, but for managers of serious money for conservative investors, such an approach would have been regarded as ‘very brave’ by the civil servant, Sir Humphrey Appleby, in ‘Yes, Minister’. There would have been no proponent who was not aware that they lived by the sword. If the underlying circumstances of the TMT boom were to happen today, the holders of a FTSE ETF would be taking exactly the same risk, many of them unaware of it, imagining that they had the safety–net of a whole asset–class alongside them. One of the reasons why the 1970s’ stock market decline was so disconcerting in America – which suffered much smaller overall market losses than in the UK – was the prevalence there of a ‘nifty–fifty’ mentality. The mania – for such it was – was based on the boxing premise that ‘a good big’un beats a good little’un’; shares in the best businesses in America rose effortlessly upwards, until one day they didn’t, and investors lost over three–quarters of their money, even as the companies themselves delivered respectable earnings’ growth, quarter by quarter.

In the 1970s and the 1990s, only one segment of the market bore valuations with no relationship to the fundamentals. Today, the ‘nifty–fifty’ phenomenon is all–embracing. Investment criteria which have been valid since the Medes and the Persians no longer hold true: borrowing levels have risen to very high levels, but minimal interest rates mean that defaults are rare; debt service is of negligible proportions, but the absence of inflation means that the possibility of ever repaying capital is unrealistic for many entities, both sovereign and corporate. The political outlook is uncertain, perhaps no more so than was routinely the case in the first half of the twentieth century, but the old order is threatened in the east, by a Chinese resurgence of power, economically and politically; in Europe from the gradual erosion of EU authority to govern on behalf of its people, and in America from the arrival of an unknown force in Donald Trump. There is a real danger that protectionism snuffs out growth in world trade. The reason is not hard to discern; everybody welcomes prosperity, but its benefits accrue always towards the few, as the commoditisation of jobs, and their replacement by technology, has made life precarious for the majority of blue collar workers in the West, and a significant minority of the professional classes.

The great question which needs an answer is, how unsound are valuations? All the uncertainties could result in poorer outcomes than expected, which would lower prices, but there are not many variables which have yet to be priced into the markets. There is a possibility that all is well on the outcomes but, as with the ‘nifty–fifties’, the earnings come through but the stocks fall by reason of an adjustment in valuation. (It is striking how well–judged the universe of that bubble had been assessed by the market – they really were the great companies of America. A very few, such as Xerox and Kodak, turned sour, but the big majority proved their mettle). The moral was: right companies, wrong valuations. Today it is the fixed interest market which is manifestly wrong, and other assets are priced off the fixed interest market. In the summer, no less than $13.4 trillion of government debt (and some corporate debt, too) yielded less than nothing. Sooner or later, this will change – maybe not in the investable time–horizon. If it is fairly certain to happen, and the post–truth world will give way to some home truths about investment, why do we all hang around, investing other people’s money in assets that could turn sour on us? It is for these reasons that we maintain positions in protection; some of these have lost money, but remain essential if ever the unsoundness of valuations becomes horribly apparent.

And that is when I remember the cars in Prague, and their occupants, escorted by the men in homburgs. If one takes a stand against the crisis, one needs to be sure to be right – not, perhaps, so very difficult – and that the timing is on the button – impossible!

As we start 2017, we continue to walk the tightrope. We remain more strongly alert to the possibility of a sharp downward move in asset prices than ever. Our sense is that it will be the premonition of untoward inflation – or, possibly, its unexpected and shocking arrival, unannounced, which will trigger the next bear market. If that is the cause, we are well protected. But with markets high, and investors still keenly interested in comparative performance, our primary emotion as we look back on 2016 is relief.