Are we there yet, Moriarty?

We are now three–quarters of the way through the year, and the stand–out performance in the portfolios has been the holding of long–dated UK index–linked gilts. The longest of them is up by 62% in that nine month period, and those who follow our thoughts will know that we have long regarded these as the treasure–house of the portfolios – the assets which will, perhaps almost single–handedly, protect us in what we describe as the airless valley to come – a period during which all asset classes will wither under the changed economic and political climate. We are therefore asking the question – has this view been vindicated? Are we gloriously right? Is it celebration time? 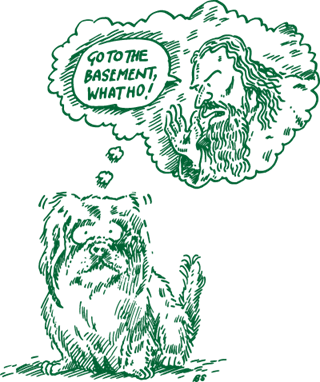 I think we need to delay tearing open the packets of chocolate digestives, because the answer is that events are not yet in sync with the prices. This does not mean that the surge in value is ‘wrong’, since the market has an uncanny way of knowing what is to come, even before it seems to be ‘knowable’. During the war, my mother lived with my grandparents in Newcastle upon Tyne, a city which was visited from time to time by the Luftwaffe. When the sirens sounded, the family would trudge down from the top of the house to the sturdy basement. After a bit, a pattern emerged: the Pekinese dog, What Ho, asleep by the fire, would, for no apparent reason, rise sleepily up and make his way down to the basement some fifteen minutes before the wail of the sirens. Had he heard the aircraft engines? The voice of God? Canine coincidence? Markets, too, hear things which are too deep for human ears.

The prices of long–dated index–linked stocks are extraordinarily sensitive to the change in the yield. In the 35 years of issuance, these long–dated stocks have, on average, had a positive yield of between 2 and 2½%. If the longest gilt currently in issue returned to that average yield, it would fall in value from its current price of 273 (on 3 October) to around 11, a drop of 96%. If the situation arises where this same stock had a yield of minus 8% – which we think is perfectly possible, and, directionally, what we predict – it will rise between thirty and forty–fold. The remarkable thing about these stocks is that in both cases they will provide exactly the promised, guaranteed return. The difference is wholly, solely, how much value the market puts on that return. This kind of volatility is alien to our way of investment, and as a result, much of the rest of the portfolio has the overt task of protecting it from the downside risk in this ‘treasure’. We are prepared to build the portfolio in this way because of the uniquely protective quality of the treasure, coupled with the ability to protect against at least some of the downside.

Let us cover again the reason why we have a confident fear that we are moving inexorably towards inflation, even as the world remains under a deflationary cosh. There were – in our view, unreasonable – expectations that the world would pull itself together after the collapse of 2008. That event was the result of unsustainable levels of borrowing, and true recovery was never going to happen without a resolution of the debt burden. Nature’s cure is to make manifest the emptiness of a promise to repay a commitment when there is no substance behind that promise; this takes the form of default. In less sophisticated times, such default was inevitable, and it condemned its participants – both borrower and lender – to a deflationary path; it took time to put a line under the fluid uncertainties thus created, from which new confidence could be built. This was not the option adopted recently by the central authorities, which did whatever it took to establish stability, without addressing the superabundance of the borrowing itself. Quantitative easing did this satisfactorily, and had the benign effect of carrying the financial world out of the migrainous uncertainty of economic prostration. It also had the effect of pushing asset prices higher – itself a great boost to the confidence of those who can afford bread and circuses.

This policy is proving to be short–sighted. The level of debt remains impossibly high; nil interest rates mean that the debts are easy to service, but they make the ultimate repayment doubly impossible. Repayment (or debt forgiveness) is, in the long term, an absolute necessity. Current interest rates lead to surreptitious control of key assets; how else could China have acquired control of Mediterranean ports? In the Old Testament, the Jubilee was a formalised debt default – without a new Jubilee, society will carry on until it becomes unbearable – in other words until the next economic downturn. As for the rise in asset values, it has created a moral crisis, because only those who start with assets can benefit from a rise in their value. Those without such assets are the victims of the current climate, where winners take all. It is not just the granite face of the indebtedness that threatens our society, it is the human face of a majority who are excluded from this ‘solution’. What is essentially a moral issue as to what is fair is rapidly becoming a political one, with extremes of both left and right becoming attracted to the Cerberus of Trump, Corbyn and Brexit – all good names for the dog with three heads which guarded Hades.

The fourteenth century philosopher William of Occam believed that the key to a conundrum can be found by making the fewest possible assumptions to arrive at it. We continue to believe that the least destabilising solution to the debt problem is the one already being tacitly adopted by the authorities – interest rates held below the rate of inflation – hence the almost comical absurdity of negative interest rates when inflation disappears. It is effective because de facto, it removes value from the saver, and therefore also lowers the real burden on the borrower to the same degree. It is a forced gift of collateral to the borrower – the feature which distinguishes (in capital terms) a debt from a gift. It is an ineffective weapon without nominal inflation – as the authorities all over the world have, to their chagrin, discovered. If only it were possible to snap one’s fingers and create inflation! Even though the interest received by a lender was an inadequate compensation for the loss in capital value during a time of inflation, it would still attract the attention of the taxman, which would drive the return yet further into negative territory. But the main advantage to the economy as a whole would be that the borrower would ultimately repay less in real terms, and that he would have been shielded from having to pay an interest rate which fully reflected the windfall reduction in the real value of his debt.

It is remarkably easy to create inflation if the authorities have a mind to do it. If Russia, Brazil and Nigeria can, then it must be pretty straightforward, since each of them wears a dunce’s cap when it comes to sound monetary policy. But it does require a prior condition – a willingness to compromise – truly to compromise the soundness of a currency. At the moment, the authorities in major financial countries edge ever closer to this point of no–return, looking like competitors in those mediaeval chastity displays, where pious men and women put themselves in increasingly compromising positions to show that even in extremis, they could still behave impeccably. Returning to the financial world, it is cheap to print money, and even cheaper to create it electronically. Unlike gold bullion, there’s no shortage of it. The language of the academics, governments and central bankers is now blasting at full fatboy, flesh creeping, levels: fiscal expansion might sound a bit arcane, but there’s no mistaking ‘helicopter money’, helpfully (re–)coined by no less a personage than the head–prefect himself, Benjamin Bernanke, the former Chair of the Federal Reserve of the United States.

Inflation is not, as one guru averred, a monetary phenomenon; it is centred in the psychology of crowds. If you think your £20 note will be worth the same next year, then you will be happy, like Squirrel Nutkin, to bury it away, and come back for it when you are hungry in the coming seasons. If you fear it will be ravaged by a nut–eating predator, as an act of will, you will consume it now, even though you are not hungry. So with money. The rate of inflation is determined, so the text books say, when you multiply the amount of money by its velocity – and nervous Nutkins around the world consume at a much more prodigious level than contented squirrels.

The answer that Occam gives requires few assumptions. It assumes that the debt question needs to be resolved, and that interest rates below the rate of inflation will achieve that with the least disruption. It assumes the authorities understand this; the imposition of negative interest rates show that they do. It takes for granted that one day, sooner or later, the authorities, pious and chaste as they no doubt are, will ‘forget themselves in a moment of madness’. It will not matter whether the madness was real, or merely perceived; posterity can settle that issue from the armchair of hindsight. It assumes that the popular response will be alarm, expenditure, velocity… and inflation. This is a view which we have held for quite some time – certainly five years. It would be easy to say that we have therefore been wrong for at least four and three–quarter years, and perhaps will be so for another four and three–quarters. We are unconcerned with timing – we want to judge accurately what is actually happening, sure in the knowledge that we are more likely to keep the investments safe if we correctly identify the big events, rather than being drawn into the latest investment fad. We shall surely miss some apparently free lunches along the way, but our approach will serve our clients better in the longer run – it is what we have done for the last quarter–century, and it’s all we know.