Perhaps the only good thing to say about the referendum is that it has fallen conveniently ahead of our quarterly investment review. The purpose of this report – more serious in intent than usual – is to make some assessment as to what has changed, what hasn’t, and what insights it gives us as to what has always been. The goal is to articulate how we are positioned to protect client capital, and how to augment it in a world which feels so fundamentally different, post–Brexit. Oscar Wilde described those who knew the price of everything and the value of nothing; this is one of those moments when prices will follow values – we need to understand the nature of things before we even consider their pricing.

The result of the referendum has shown the country to be split down the middle, and, every bit as importantly, each angry and upset with the other half. The Remain half has seen something precious, and of fundamental worth, snatched from them, by voters whom they strongly believe had not the slightest idea or concern as to what they were doing. They feel contempt for those who sheepishly admit that they were registering a protest vote, but always within the comfort blanket of intending to be on the losing side. They have contempt mixed with incredulity at those who still do not realise the enormity of the damage done. 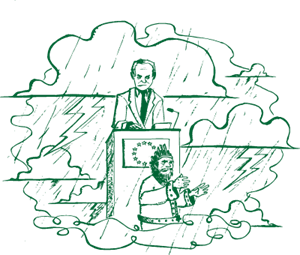 Have they not observed the price of British Land, or seen the fall in sterling? Have they not quaked in fear at Donald Tusk, President of the European Council, who outshines King Lear in enumerating the terrors which will befall England? Do they not see the ‘enemies’ within – Martin McGuinness back in the headlines in Northern Ireland, or Nicola Sturgeon, who seems like such a nice girl, but has the spit of a cockatrice in her plans to dismember the Union? And they see utter folly in allowing the same vote to the chap in a greasy spoon in Goole as to the educated reader of the Guardian who thinks so carefully about these things.

This last sentence is designed to shock, since we all give lip service to the democratic idea that all views are to be treated fairly. As a generalisation, those with hope voted to live in a country which was connected with the prosperity, the harmony, and the culture offered to the citizens of the world; those without hope voted for change, having nothing to lose by overthrowing the status quo. Thus the young, with the hope of their lives before them, voted to stay in, whereas the old, especially amongst the genteel, voted for the memory of Britain’s past glory. The Establishment, the workers in global companies, and the cosmopolitan voted to Remain, whereas the disenfranchised, particularly in the North, voted to leave. I was especially struck by a pair of photographs juxtaposed in the Financial Times – they showed a merry sparkling Brighton, with a caption showing voting intentions heavily biased towards Remain, and a desolate Bognor, whose intentions leaned equally heavily towards Brexit. Readers were invited to conclude that those who saw the sense of voting for prosperity could themselves expect to be prosperous (the Financial Times conducted a stridently pro–Europe campaign). But, of course, exactly the opposite conclusion should have been drawn – that prosperity for one part of society is a dangerous thing in a world where the rest outnumber them, and are given the opportunity to do something about it.

We live in a world of two cities, and I am in a good position to understand each of them. From Sunday evenings until Wednesday afternoons, I am in the very centre of the Remain universe of London. I look at screens which straddle the world, I meet envoys from every part of the globe – I study currencies, monetary policies from each of the major financial powers, and avail myself of the vibrant life of London which brings together the cornucopia of treasure from an international village. When I return to my other life in Bishop Auckland, I join the world of Brexit. The town is almost completely innocent of outsiders. The area is almost completely funded with EU money. Down the road at Newton Aycliffe is the mighty firm of Hitachi, whose railway and locomotive business is set up to capture the European rail markets. Its President, Hiroaki Nakanishi, one of Japan’s titans of industry, has threatened to pull out of the UK if we voted for Brexit. Conventional wisdom would have said that these were three good reasons for not disturbing the status quo – but the Durham region voted decisively for Brexit.

These two worlds hate one another, and this is a serious matter. The Remain team are openly contemptuous of the Brexit campaigners – take, for instance, the naturally gracious Lord Hill, whose informal interview with the BBC when he resigned as EU Commissioner, came across as a headmaster sighing, more in sorrow than anger, that the Brexit team had no thought as to the consequences of their action, and would ‘need to put their thinking–caps on’. This was not a statesmanlike thing to do, and (since it may well be right) runs the risk of further undermining what is already a difficult situation. It’s a fair enough jibe in the campaign, but after the campaign it serves no useful purpose, and is not even very relevant; does it actually matter if there’s no game plan? The future is impossible to read, and those of us who study macro economics know that complete ignorance and the views of many economists all saying the same thing are of equal (which is to say, no) value. Those with a game plan are truly no more likely to be right than those currently without one.

It is too early, too, to know what the political fallout will be. It’s easy to forget how implacably the formal march of time deals with political parties when they reach their sell–by dates. Scotland often leads the way. I remember how successive elections in the 1970s removed all the Borage McPorridges of the Conservative Party from their rural electoral seats, and the same thing has happened to the nicotine–fingered apparatchiks of the Labour party in the great Scottish cities and elsewhere at the last election. The Remain campaign did well in Scotland precisely because it was conducted by the SNP who have the credibility and affection of the Scottish people – it reminds England that it is the lack of this moral mandate which encourages the anarchy of the free vote: Conservatives and Labour alike are no longer – in this all–important matter – fit to govern and we must expect the rise of populist parties, probably as yet unformed.

At the moment, all eyes are on Britain, and the high priests of the Commission queue up to enumerate the evidences of Britain’s defeat. As the Conservative Party and Labour vie to give new meaning to the word ‘dysfunction’, it is hard to disagree. Yet Europe is considerably more vulnerable than Britain. The EU structure is no longer democratic; its leaders have created a structure which bears no relationship with the wishes of its members, although, as with all tyrannies, it is proclaimed in the name of the people for the good of the people. The region seethes with disaffected voters, who from time to time have opportunity to express their opinion electorally. The UK government has broken the omertà of the EU society’s code – allowing the people their say. If the market senses that what began in Britain is replicated elsewhere – indeed, even in one other country, then the euro will weaken, reflecting its uncertainty. Suddenly, the UK’s decision to leave is shown in a startling new light. It will look brave and astute in equal measure. In a deflationary world where globalisation is the instrument which delivers its harsh message, economic isolation becomes a haven – as it did, for instance, in Sweden in the 1930s.

There is great danger for the European regime today. The electorate are not to be trusted, and the construct only holds together if there is unanimity. The markets can see clearly that the financial underpinning is unsound, but such is the scale of the EU machine, it remains unchallenged – when Soros brought down sterling in 1992, he failed to bring down the French franc when Germany came in behind its Gallic neighbour; the market took this lesson to heart. That reticence will change if the EU is weakened to a sufficient degree. The EU will do everything in its power to avoid this outcome – which brings us on to the longstanding theme of our portfolio construction: the coming inflation.

We have always maintained that it is easy to bring about inflation when conditions, as they are today, are horribly deflationary. It does however mean a fundamental compromise of the currency – not something done lightly, but, like virtue, jettisoned advisedly when the alternatives are sufficiently unattractive. Expect the EU to pump liquidity – the mot du jour is ‘helicopter money’ – into the system. The place to look at the moment is what is happening in Italy, and, in particular, the Italian banks, which are being bailed out in a way which will be the first of many such instances. The markets will turn on such behaviour, sooner or later – and when that happens, the euro will prove very remarkably weak. Alas, when the euro is weak, expect sterling to lose its competitive advantage as it strengthens. The tensions in the financial system are every bit as worrisome as those in the political arena, and it might just be that the lasting legacy of Brexit is financial turmoil – not political.