I was having a wry chuckle at a headline in a pre–Christmas edition of the Daily Telegraph which read, ‘Why 2016 will bring good news for savers’. Here, I am afraid, is the opposite view. Previous editions of this investment review have been articulating the idea that the stabilisation of an over–indebted world will be achieved on the back of a compromise of the world’s savings. It is now clearer than ever how the battle–lines are drawn, and it is time to consider them. This review is largely concerned with the domestic climate, but the trends are international, and should be seen as reflective of a world–wide dynamic.

Two factors only have made life easier for the bottom and the top of the savings pile. There is a holiday on tax for basic rate taxpayers on their deposits (up to £1,000), and a similarly benign regime has been introduced for those who receive less than £5,000 of dividend income. This tax break will help the needy; its effectiveness depends on our idea of need, and a saving of £6,000 tends to make King Lears of most of us (‘O reason not the need! Our basest beggars are in the poorest things superfluous…’). The other is the rise of capital values since the credit–crunch over the last six or seven years. This has been most valuable to the very rich, whose lifestyles rely little on income from their wealth, but rather on the capital value of their assets. At a more modest level, it has shrouded the enormity of the income crisis from ordinary investors whose sense of financial comfort stems partially from their capital worth, which looks good, offsetting the uncertainty of their income stream. In the long run, the lack of income is, for most people, more worrisome than the capital growth.

This ferocious attack on unearned income has come both from falling interest rates, and from taxation. Let us start with the fall in interest rates.

In early 2008, base rates stood at 5%. They have, to all intents and purposes, disappeared. A great fuss has been made of the rise in interest rates in America from 0.25% to 0.5% – indeed it was this cornucopian move which prompted the writer in the Daily Telegraph to see better times ahead for the saver. In fact, the worldwide trend is exactly the other way, with interest rates in several countries going below zero. This ‘impossibility’ has sinister implications – the bank which had seemed so rapacious in offering no interest at all on deposits is likely not to accommodate the money at all in these circumstances – it is a first step towards the start of the money–less economy which Andy Haldane of the Bank of England has welcomed. For the saver it is a world which requires money to be utilised speculatively, because there is no longer a safe or easily–accessed haven in the banking system itself. The wildest Ponzi schemes are most often seen in those countries without a sound banking structure – negative interest rates bring Albania to Albion.

In normal times, such a beleaguered group would attract Government subsidy – but Her Majesty’s government’s actual response has been exactly the opposite – to close off attempts to ensure long–term savings potential for families. Over the years, the opportunity to fund pensions has virtually disappeared; buy–to–let has been compromised, and dividend income is from 2016/17 taxed twice – the effective rate to a high rate taxpayer will be more than 50%. 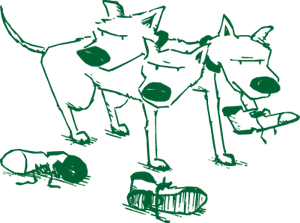 The result is grim news for the saver – a sharp reduction in income, and what is left has been hit with higher tax charges. We await the last boot to fall (this attack is from Cerberus: three heads, three boots). Many investment strategies have sought out higher yield assets – and we are seeing the income from them collapse. The big oil companies are still undecided about their dividend policies, but just before Christmas, the mining giant BHP, indicated that the dividend was being passed – what signal does this give Rio Tinto, whose outlook is similarly clouded? How about the drugs businesses, Glaxo and the like, as their blockbusting drugs go off–patent? In the fixed interest market, the high yield sector has at last come to its senses, and is now pricing in the certainty of defaults. It is interesting to go back to the days before the cult of the equity, when nearly everyone thought only in terms of yield, and wanted the contractual comfort of a fixed interest investment, not the blue–sky possibility of a capital gain in the equity of a new business – the latter tended to be owned by the founding families. Seen through the eyes of most of the last two hundred years, what is unfolding is something extreme; not the sort of thing that Conservative governments do when they fancy themselves radical. It is a conscious decision to compromise returns on savings – an attack, although obscured by the concomitant rise in capital values, which is the first step in the recalibration (downwards) of the savings of the country’s citizens. Let us be unsurprised when the more conventional enemy of savings – inflation – is deployed.

This process of wealth redistribution is much more efficiently achieved in inflationary conditions. It takes a long time to achieve if savers receive nothing, but there is no inflation – since the tax take on nothing is also nothing. See how things change with inflation at 8%. Interest rates go up to, say, 4% – on which HMRC get around half. Suddenly three–quarters of the mischief falls on the saver. It has other ‘advantages’, too. Pension funds can revert to the deceptions of yesteryear, paying out promises on nominal figures, when they are no longer worth what they were. And, just as in the 1970s, some of the debt overhang is removed by default, even with interest rates at 4%; in the 1970s and 1980s, it was the combination of wealth transfer and default – not too much of the latter to be destabilising – which allowed a debt–free environment in the later 1980s to host the Thatcher boom.

It is important to understand why a Conservative government is pursuing a policy so little different in its effect to that of Lenin, and the many socialist extremists who have followed on, up to and including the metaphorically–bearded Thomas Piketty, whose best–selling work on world economics is predicated on redistribution of wealth. It may not be doctrinaire in its origin, but this increasingly desperate attempt to stave off the deflationary forces which our economist, Peter Warburton, has graphically described as having a ‘logical tendency’ towards the paraphernalia of large–scale bankruptcies and falling markets, results in an equally certain diminution in savings. Throw some of the family silver out of the balloon, and maybe its occupants will make it over the mountain–tops. Unresolved debt (which creditors still believe has value) has been kept afloat by low interest rates, which have inflated asset values of sound and furious investments alike. Thus when everybody looks at the value of their assets, they feel richer than they are – but the true state is more easily captured by the spendable, after–tax, income that their assets generate. While the Pikettys and Lenins want the rich to suffer, the government apply these measures for medicinal purposes – the necessary steps to rebalance the wealth from creditors to debtors, without the caesura of default.

The last year has seen more difficult markets, with the indices being held up by the continued strength of comparatively few stocks, and strength in smaller company shares. In the arena of stock picking, the small cap arena is most prone to the confusion between skill and a bull market. A real bear market has been seen in the commodity arena and emerging markets, as the weakness of China points to a policy of falling currency exporting both goods and deflation to the west. This is the backcloth to the world which is developing in the way that we have described above, and a rising dollar and rising interest rates are the stuff of destabilising deflation in the US itself. In previous investment reports, we have simply asserted that the policies of the western world, but, most particularly Japan, are intended to harm the saver to the advantage of the borrower. Everything – more than everything – has been done that can be done to bring this about – while always stopping short of inflation. We are bold enough to make the prediction that this state of affairs will change during the course of 2016. The sum total of the palliative measures taken against these deflationary forces are proving both extreme, and ineffective of themselves, at keeping this deflationary dragon at bay.
Jonathan Ruffer
January 2016