Would a stock, by any other name, rise just as high?

Traditional finance theory tells us that markets are rational. Investors incorporate all public and private information when making their investment decisions. This school of thought is grappling with the field of behavioural finance, which asserts that human psychology and biases also act in an irrational way to influence these same investment decisions.

One well recognised phenomenon in psychology is the fact that individuals show a preference for information that is easy for the brain to process. This characteristic is known as fluency and leads to feelings of familiarity, affinity and a positive impact on our judgement. Rhyming proverbs such as ‘woes unite foes’ are believed to be truer than snippets such as ‘woes unite enemies’.

A collection of studies over the last decade has shown that this phenomenon occurs in stock markets. The first of these, in 2006, found that the early performance of a listed share, for example following an initial public offering (IPO), is positively influenced by the pronounceability of the company name and ticker symbol.1 Those companies with easier-to-process names and tickers performed better over the short term.2 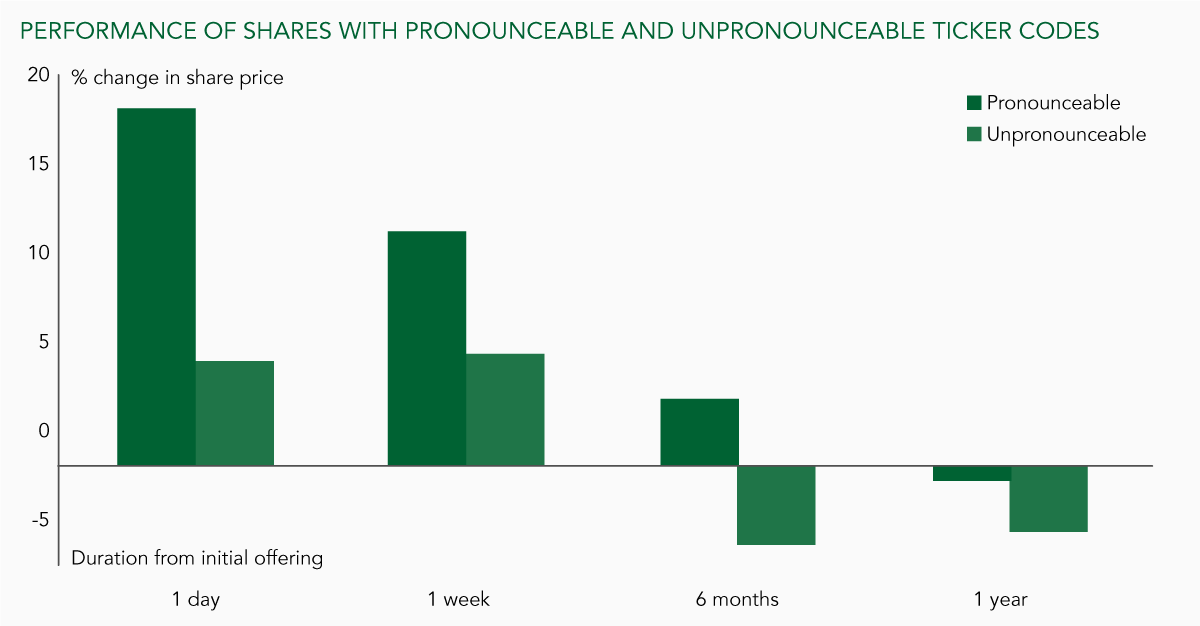 This finding is particularly telling given the failure of many complex, economic models to determine significant drivers of short-term price movements. The answer may be something as irrational as name fluency.

In 2013 a pair of researchers identified that those companies with fluent names tend to have a broader shareholder base, greater levels of share turnover and better liquidity profiles.

Since then, studies have expanded on these results. In 2013 a pair of researchers identified that those companies with fluent names tend to have a broader shareholder base, greater levels of share turnover and better liquidity profiles.3 Fluency in this case was defined using metrics such as length, Englishness4 and performance in a standard spell checker. More fluent names led to higher valuations (price-to-book ratio) and greater firm value. Amongst smaller firms, the results were particularly robust, perhaps since investors are less familiar with the company’s underlying fundamentals and must resort to the simplicity of the name. They go further. The fluency effect is also seen within firms. A change in company name to a more fluent option also translated into an uplift in firm value, implying that fluency is not a proxy for a company that is larger, better run and more familiar. 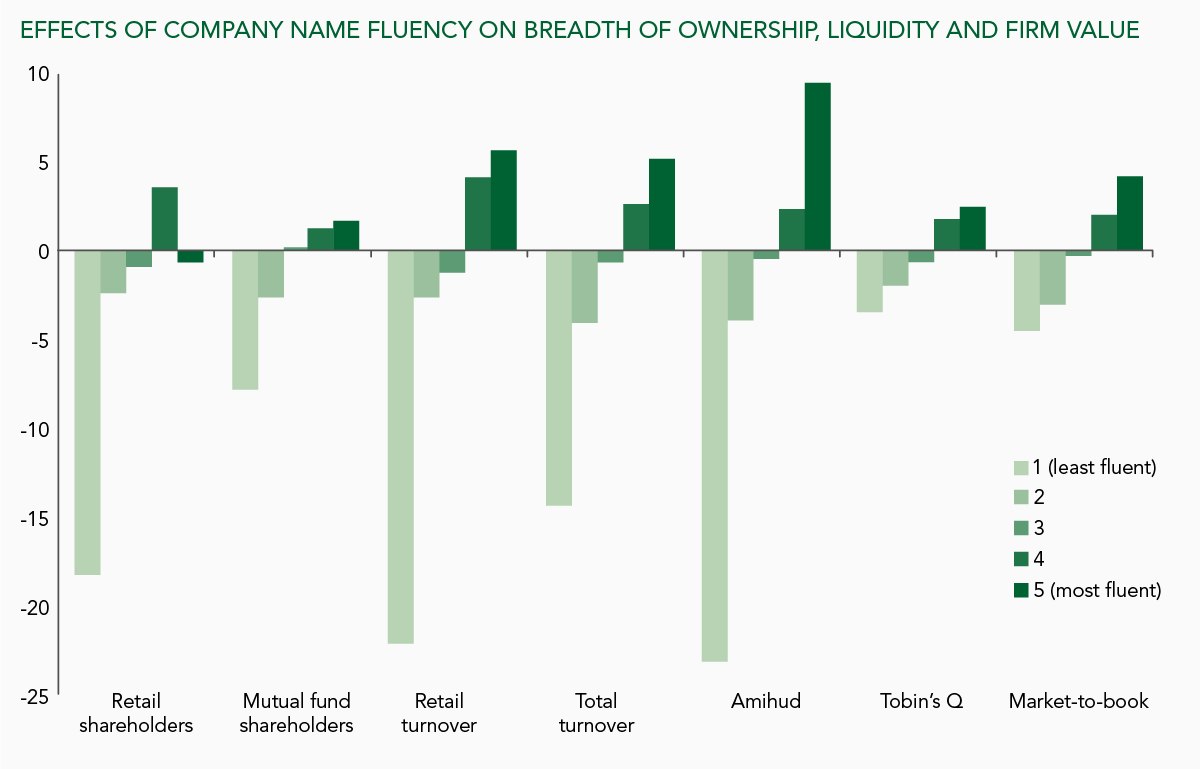 This phenomenon is not confined to the western markets and languages. A 2018 study on A-share listed Chinese companies found that those with simple ticker symbols, based on length and number of strokes, also traded with higher liquidity and superior performance following an IPO.5 Once again the effect is more pronounced where there are higher levels of information asymmetry.

In sum the evidence implies that investors respond positively to more fluent stock market stimuli. Elements unrelated to company fundamentals are impacting investor evaluation. And what’s more – this is a global occurrence. Such an effect predicts that companies with names like ‘Apple’ will be afforded more preferential trading characteristics than companies with names like ‘Bristol Myers Squibb’, at least initially. If so, it is an obvious method for a management team to improve investor recognition, company trustworthiness and firm value.

In the field of psychology, it has been known for some time that individuals rely on heuristics and mental shortcuts when evaluating information.


In the field of psychology, it has been known for some time that individuals rely on heuristics and mental shortcuts when evaluating information. It seems that in today’s world of excessive information and data, this is also apparent in financial markets. Cognitive constraints force individuals to be selective about processing information and ultimately prefer that which is fluent.

On reflection, this phenomenon occurs time and again in different forms. A variety of the fluency effect was at work when public companies experienced a significant boost in value after changing their name to include ‘.com’ or ‘blockchain’ during both the dotcom and bitcoin booms. Evidence suggests that theme park rides with more complicated names are deemed to be more risky and less popular. The same is true for drugs and food additives. The cognitive ease with which stimuli can be processed has a positive impact on its evaluation, in all walks of life. This has wide reaching implications. Information is not cognitively equal and we should consider the fluency and simplicity of any that we choose to present. It may have a profound effect on how it is valued.

The Barber Boom
The story of an economic gear shift which sent post-war Britain careering around country lanes, before skidding on an oil slick and being sent ditchward. There it was left, engine smoking, entangled in the brambles of inflation. It wasn’t until 1980 that road-side recovery eventually arrived in the shape of Paul Volcker and his inflation curbing toolkit.
Read
Cold War II
July 2020: Alexander Chartres, Investment Director and resident geopolitics specialist, explores the shifting sands of world order. He discusses the deteriorating relationship between the US and China and considers the implications of a new world disorder – on companies, portfolios and our everyday lives.
Read
Scrabbling around for income
July 2020: Coronavirus shutdowns have triggered the worst recession since the Great Depression. Like a depth charge dropped against a submarine, we’ve felt the shockwave but have yet to see how much debris floats to the surface. Ratings agencies suggest the damage is serious and that default rates will soar.
Read

Chart 1 Performance of shares with pronounceable and unpronounceable ticker codes in the AMEX market after entry to the market, from 1990-2004. Alter & Oppenheimer 2006 ncbi.nlm.nih.gov/pubmed/16754871